KNK and Tinkerbells make Paris their Neverland for one night

The tall and handsome members of KNK (Keunakeun) brought their Sunrise tour to Europe, and stopped in Paris on August, 25th.

KNK debuted in 2016. With KNK members coming from different backgrounds, they form a group of talented performers. Always keeping a mature concept, they’ve released several EPs and single albums with songs like “I remember”, “Lonely Night” “Sunset”, “Back Again” or “Sun Moon Star”, all included in the setlist.

However, this mature concept doesn’t prevent the group for showing their playful side on stage. The members smile, give finger hearts, wave hello. Many of the fans who attended the concert agree to crowning Seo Ham the king of fanservice. During the encore, he event appeared with cute fairy wings and flowers in his hair, contrasting with his classy image.

KNK proved their appreciation towards fan projects by picking up not only the banners but also the fanmade lightsticks. Fans went along with the Tinkerbells concept with banners saying “Paris is our Neverland”.

The members also didn’t hesitate sharing their stories from visiting the city. From going shopping to seeing the Eiffel Tower or eating in a fast-food restaurant, they had a “regular tourist” experience before performing in stage.

During the show, Ji Hun, the leader of KNK, hurt himself. He probably hurt his back, as we noticed him having a hard time picking up his bottle of water from the ground. That’s the only thing that was noticeable, though. During performances, he kept the choreo going with a smile on his face and a professionalism that inspired respect.

An other memorable moment was when the members sang some lines of their favorite songs. Singing a cappella is never easy and always a bit risky. The members didn’t hesitate doing so and the vocalist In Seong amazed the crowd.

His members proudly mentionned his recent participation to the TV show King Of Masked Singer where he perfomed Ali’s Eraser. Upon hearing him sing a ballad by himself, he definitely has the kind of stable and powerful voice that would be perfect in a musical.

For their final ment, the members expressed their thoughts about the concert. Dong Won said :
” It was the last concert of our Europe tour. What I’m feeling is exactly the feeling of not wanting to leave the stage. Feeling like I dislike leaving the stge and want to stay on stage. Thanks to you, we coud have a tour and received a lot of energy through our Europe tour. Thank you for letting us finish the tour in a beautiful country”.

As for Seo Ham, he said made sure to thank the fans for being the reason for their achievements. “Thanks to our fans, we could release our album. Having a Europe tour was a dream and it also became true thanks to the fans. Thank you for waiting for us during the past 4 years. I hope that tonight is a nice memory for everyone. We will work hard to come back. I wish that everyone lives well, be careful when going back home.

Hee Jun didn’t miss the opportunity to share a message related to the venu’s history. Four years ago, Le Bataclan, the venue, was the place of a major terrorist attack. Hee Jun said that he wished for peace on earth and “I wish for peace on Earth. I wish that arts and music can unite people. I am always with Le Bataclan”.

A thoughtful speach that made some Tinkerbells shed tears but proved how the members care for their fans around the world.

We’d like to thank MyMusicTaste for having us at KNK’s Sunrise tour.
Don’t forget to visit their website for more information on their upcoming tours, including Pentagon and Dreamcatcher. THE BOYZ Europe tour proves they’re a group to keep track of! 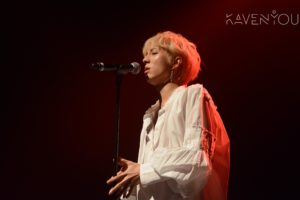